Uttering The Assurance of Things Hoped For, The Conviction of Things Not Seen

I've had a fairly rough day today. Sparing you all the details. However....

Thanks to my friend San Williams, I read tonight the preface to Walter Brueggemann's newest book, A Gospel of Hope. Not sure whether it saved my life, but it certainly saved my day. 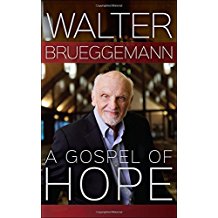 All of us preacher-types, it is said, only have three good sermons within us. We keep preaching variations of those sermons for all the years we find ourselves in the pulpit. I've wondered from time to time what my three would be. In analyzing the texts over thirty years of preaching, my Number 1 Preaching Text - oddly enough - is not the 23rd Psalm or the Easter story or even one of the Gospels. My most-preached text comes from the letter to the Hebrews: starting with chapter 11, first verse, and going through about the third verse of chapter 12. I've preached on that passage, or some permutation of it, at least a dozen times over 30 years. Now, thanks to Brueggemann, I see again the power of that text in my life.

For those of you who may be casual readers of Hebrews, it starts out this way: "Now faith is the assurance of things hoped for, the conviction of things not seen. For by it, those of old received divine approval." The author then sets out to enumerate the fathers (and mothers!) of the faith, and their great acts - those "who through faith conquered kingdoms, shut the mouths of lions," etc. - even "women who received their dead by resurrection." We're told that those "of whom the world was not worthy" were stoned, sawn in two, ran in deserts, etc. Not exactly the kind of life that Joel Osteen and those of his ilk say await God's beloved!

Then the first word of Chapter 12 is "Therefore." In Greek, that word always serves as a flashing arrow - "Pay attention to what's about to be said!" Therefore.... since WE are surrounded by so great a cloud of witnesses, let US run the race that is set before US, looking to Jesus the pioneer and perfecter of the faith, who "endured the cross, despising its shame, and is seated at the right hand of God." He made it through, and so can we. But then here's the kicker: in verse 3, we're told to "Consider him who endured such hostility against himself from sinners, so that YOU may not grow weary or lose heart." To some degree, the utterances of Hebrews are all about us! Those fathers and mothers of the faith endured what they did not only out of our faith, but also so that when days like I've had today occur, I can have a reserve tank of hope. And that reserve tank is not just for making me feel good - it's so that I have enough in my tank to encourage you in hope as well. Listen to how Brueggemann puts it:

"Faith" in the rhetoric of this text is not a package of certitudes or a trusted mantra [such as,"It must be God's will!!"]. It is rather reliance on and trust in a future-giving, future-hoping God who constantly makes a way out of no way. Thus faith, in this verse, promptly morphs into hope for the future that will be unlike the present. What follows in the chapter is a roll call of hopers who have refused the status quo because they trusted that God has "something better" for those who are courageously able to move on. Hope, in Hebrews 11 [and 12], is not a head trip or a heart trip; it is a body trip of putting one's body at risk for the sake of new possibility....Here in Hebrews 11 are the names of those who have risked their bodies for the sake of the future. This roll call is pertinent for our dangerous time, and one wonders whose names are yet to be added to that roster. (Preface, page x)

No wonder I preach on this so much. This is what I need in order to deal with random bombers in Austin, any one of the numerous school shootings, terminal illnesses, various "actings out" of purportedly well-behaved people, political idiocy - you name it. I've said in other arenas that there's no time like the present for us to be The Church, to do what God calls us to do and to live as God calls us to live, to be in those places of pain and to bear the good news of the Gospel. On days like I've had today, I can hardly put one foot in front of the other. But then again I turn to read of those who "died in faith without having received the promises, but from a distance they saw and greeted them." (Heb 11:13)

My conclusion: to do God's will, we have to utter. To utter, we have to have courage. To have courage, we have to follow the endless courageous examples who have gone before. And we have to cling to the promise, in Brueggemann's words, that "God still surprises us with more and better." Hope isn't for the faint of heart. But it is to hope that we are called.