The Mary We Only Thought We Knew

This has to be one of the most unusual Advents I’ve experienced in any memory, much less recent memory. I have found it fascinating, even in just the first week of Advent, how the lectionary texts roll their way around, in and through our national headlines. And, I want to confess to you that, thanks to Facebook, I’m developing a new relationship with that central figure in our stories and in our manger scenes, Mary.


I’ve always had a bit of an ambivalent relationship with Mary because of the role she plays in the lives of our Roman Catholic friends. Historically I pooh-poohed her role because of our Protestant belief that no intercessor is needed between us and Jesus. But in doing so, I think I have totally underestimated her place in the Biblical story. 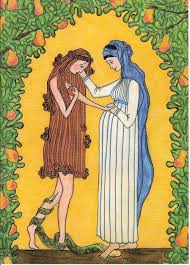 The most arresting (to me) portrait of Mary has been circulating around on Facebook and elsewhere on the Internet. This is a depiction of a meeting between Eve and Mary, done in crayon (believe it or not)  by Sister Grace Remington. Notice their feet. Mary forgives the sin of Eve as she tramples the serpent and shares the good news of her pregnancy. Contemplating this work of art takes my breath away.


When I got to investigating things, I discovered many, many depictions of Eve with Mary in art, in stained glass, even one carving on a building. The Church has known for centuries what I’ve ignored for decades - and once again, the community captures my attention and reins me in. 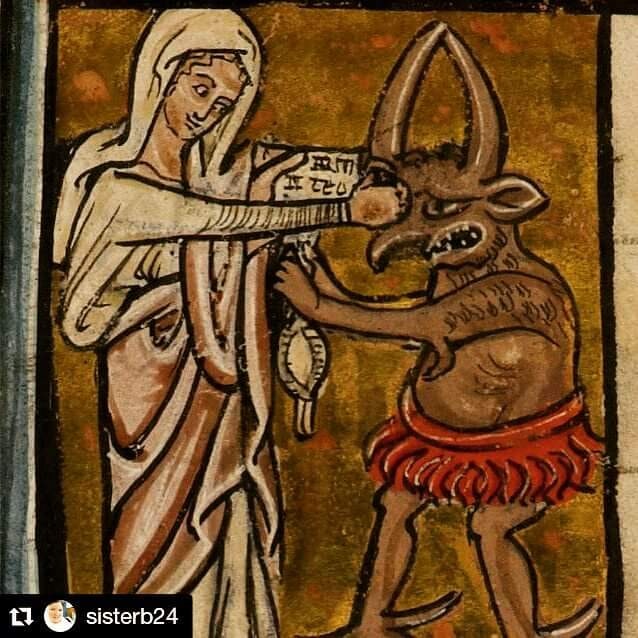 All these years, I had thought that this picture was instead my favorite depiction of Mary. It’s still a contender - this is from the 13th century, depicting Mary giving one to Satan right between the eyes! That’s the Mary I know and love. Actually, though, I think they’re two facets of the same woman: one who sees a role for herself in redemption and grace, and the other who sees a role for herself in overcoming evil - in redemption and grace.
One of the things I love best about this time of year is the encounters scripture gives us with Elizabeth, with her husband stunned into silence, with John the Baptist acting up even in the womb, with Joseph - and especially, with Mary. Her song of praise, the Magnificat (Luke 1:46-55) is full of enough metaphor, theology, power and strength to get us through the rest of our days.

If you want to read more in depth, don’t miss the classic work Blessed One, essays on Mary edited and compiled by Beverly Gaventa and Cynthia Rigby. But I would also direct you to this wonderful blog post by Rachel Held Evans, hot off the press as of this writing:  https://rachelheldevans.com/blog/unsentimental-advent
Listen to the good news Rachel shares:


Merry Advent, dear ones. Those who think they’re in power - in any scenario - are actually in deep trouble. But it’s going to be okay. Whatever’s going on, God’s got this.